Nearly every week brings grim reminders of the continuing problems of gun violence that plague our nation. Little more than one week ago, we marked the one-year anniversary of two tragic mass shootings: the Walmart shooting in El Paso (23 dead, 23 wounded) and the entertainment district shooting in Dayton (9 dead, 17 wounded). We have seen this week’s news reports about an increase in gun violence in various American cities. And, for me, a recent gun suicide has affected my extended family. The easy acquisition of firearms and the nature of firearms available to the public guarantee that the problems of gun violence will continue. 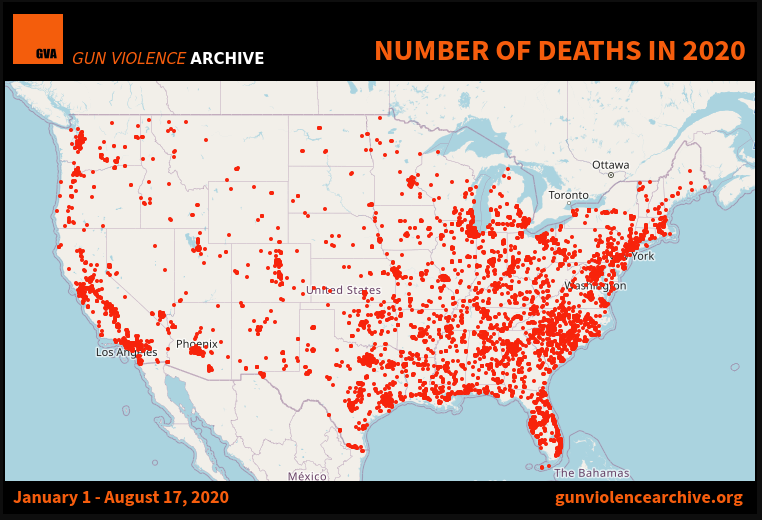 The foregoing tragic statistics from these two mass shootings as well as the uptick in gun violence are—sadly—routine.  Our familiarity with repeated gun tragedies forces us to resist the feeling of “numbness” that leads to passive, fatalistic acceptance of that which never seems to change.

Unfortunately, there was a dismaying development reported in last week’s news that is a source of concern about the future of gun violence:  gun sales are booming and spreading to new categories of buyers.  The FBI reported a 70 percent increase in background checks for gun purchases and concealed carry permits for June 2020 as compared to June 2019.  A gun trade association reported that there was a 95 percent increase in gun sales and 139 percent increase in ammunition sales for January-June 2020 as compared to the same six-month period in 2019.  These are millions of additional guns added to the estimated 400 million firearms already circulating in American society.  The additional weapons create added risks of suicides, domestic violence homicides, deaths and injuries from the commission of crimes, and accidental shootings by children.

A particularly striking aspect of these news reports on the boom in gun sales concerns the shift in the customer base:  40 percent of recent gun purchases by women and a 50 percent increase in gun sales to African American buyers.  Adults in every demographic group should have the equal opportunity to purchase products, including firearms, when those purchases comply with the law.  The striking question concerning the changing composition of gun purchasers is “why?”  And the same question applies to marked increases in gun sales at any moment in time.  Unfortunately, commentators across the political spectrum seem to agree on the reason for the spike in sales and the changing composition of buyers:  fear.

Experienced buyers of firearms may add even more weapons to their home arsenals when they fear that upcoming elections will empower officials who will work to regulate guns.  That’s not new.  It happened during the Obama administration, so it is no surprise if current gunowners again buy more weapons as they face the uncertainty of what will happen on election day in November.  In addition, purchases by new buyers—as well as by current gunowners—may be driven by perceptions of potential danger, chaos, and an uncertain future amid protests and political polarization across the nation.  Indeed, there is a risk that the new set of buyers may be motivated by their fear of traditional buyers, especially in light of events such as the invasion of the Michigan state capitol by gun-toting protesters.  This action communicates quite clearly that certain segments of society are prepared to use firearms as a threat—but hopefully not more than that—to advance their political opinions.

Unfortunately, we know that a cycle of fear can motivate increased gun purchases and thereby enhance the risk of gun violence.  For example, based on his writings, the El Paso Walmart shooter in 2019 was motivated by fear-driven hatred of people with Mexican and Central American ancestry.  He openly expressed his fear that immigrants from Latin America were “invading” and “taking over” the United States.  He targeted victims at the Walmart whom he perceived to be of Latin American ancestry.  Immediately afterward, gun sales in El Paso boomed among members of the demographic group that the shooter had just targeted.  Presumably, these sales were a fear-driven response to the risk that other armed Americans shared the shooter’s fear-based hatred and violence that caused so much bloodshed and loss of life.

Certain commentators and politicians seek to inflame people’s fears through exaggerated characterizations of the current moment as one that places American society in an especially dangerous period of criminal violence and disorder.  In reality, violent crime is much, much lower today than it was three decades ago.  According to national crime victimization surveys conducted by the U.S. Bureau of Justice Statistics, violent crime rates dropped by 70 percent from 1993 through 2018.  Those surveys include unreported crimes as well as those for which the police were called.  The FBI’s statistics on reported crimes show a 50 percent reduction in violent crime rates over the same 25-year period.

Some of these commentators claim that the nation’s current uptick in violence stems from defunding the police.  Yet, police budgets have not changed in the past few months.  The still-developing concept of shifting resources from law enforcement to social services is under discussion in many places.  It is not yet an actual policy.  Moreover, criminal justice scholars know that there is rarely a single, simple explanation for short-term upticks or downward trends in crime rates.  Instead, such scholars urge commentators and policy makers to consider the interplay of social forces and economic conditions in specific cities.  We should all recognize how our unique moment, with the pandemic-driven economic downturn, a sudden rise in unemployment, and diminished trust in police, may create frustration, anger, despair, and an inclination toward self-help justice in some places.  Hopefully, policy action to halt the pandemic, revive the economy, provide financial support to those in need, and reform the police will help to make this a temporary uptick in violence.

When fear is a driving force that motivates both gun purchases and opposition to gun regulations, how do we educate and persuade others about gun violence issues?  It may not be enough to educate people about the nature of gun violence and the policies with potential to reduce harm.  We must also think about how to reduce people’s sense of fear and provide perspective on how firearms increase the risk of harm but do not provide a guarantee of personal safety.  These are not easy tasks.

WHAT CAN WE DO?

A. Gabbatt, “Homicides Rise Across U.S. Cities Amid Pandemic and Economic Crisis,” The Guardian, August 12, 2020.

K.Obeng and R. Greco, “Gun Sales Are Rising in Michigan. Who’s Buying Them Might Surprise You.” Lansing State Journal, August 6, 2020.