It is long past time to ban firearms in the possession of anyone other than law enforcement officers in the State Capitol and on Capitol grounds.  Will we learn any lessons from the shocking plot against Gov. Whitmer, including news media-verified photos of accused plotters standing in the legislature’s visitor gallery holding weapons of war as they looked down on our elected representatives? 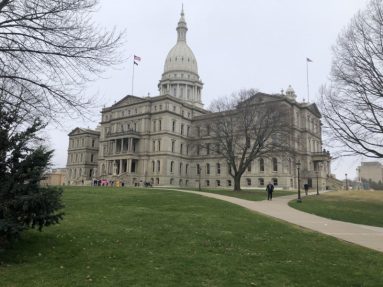 There is no Second Amendment impediment to banning firearms at the Capitol.  The right to own firearms was defined by the late Justice Antonin Scalia—a gun owner, hunter, and conservative icon—in District of Columbia v. Heller (2008).  Just as reasonable time, place, and manner restrictions can be imposed on freedom of speech under the First Amendment, so, too, can such restrictions be imposed on gun-carrying behavior under the Second Amendment.  As Justice Scalia explained, “…nothing in our opinion should be taken to cast doubt on… laws forbidding the carrying of firearms in sensitive places such as schools and government buildings….”

What is the beneficial purpose of carrying firearms in the State Capitol, or even on Capitol grounds?  Is there even a benign justification?  This behavior cannot accurately be described as fulfilling Second Amendment rights.  If the only justification is, “I do it because I can,” then it is time to change the rules.  The FBI’s website describes “domestic terrorism” as “threatened use of force and violence…to intimidate or coerce a government…in furtherance of political or social objectives.”  Any thoughtful observer can see that, even if no trigger has been pulled (yet) within the Capitol by gun-toting protesters, such behavior fits this definition of “terrorism.”  And now there is evidence that some of those who have brought weapons into the Capitol do, indeed, have violent intentions.

Weapons of war in the hands of untrained civilians with unknown intentions unquestionably communicate the threat of violence and therefore present an act of intimidation and coercion.  When we permit those threatening weapons to be just a few feet away from the interactive processes within the state legislature, we harm our own ability to engage in peaceful self-government.

If someone is seen with a firearm on MSU’s campus, an alert is triggered to warn people via emergency text messages and produce a quick investigatory response by police officials.  In this way, individuals with unknown intentions cannot carry weapons of war in a place with many people present.  By contrast, under the current rules, individuals with malevolent intentions can readily position themselves to do catastrophic harm within our State Capitol and on our Capitol grounds.  Moreover, we know from the charges against those who allegedly plotted against Gov. Whitmer, that the ability to bring firearms to the Capitol grounds was part of suggested plans to place terrorists in position to readily storm the building.

The horrifying news about the plot against Gov. Whitmer is a warning that cannot be ignored.  This is not a partisan issue.  Elected representatives from both political parties are at risk, as are school children on their class trips to the Capitol.  A prohibition on firearms does not threaten or alter the legal definition of the Second Amendment rights as established and explained by Justice Scalia’s opinion.   It is clearly time to change current rules that permit unjustified risks of intimidation and harm.  Michigan State Capitol Commission—where are you when your state needs you to act?