In recent days, the nation’s attention has been appropriately drawn to an important election.  As the dust settles in the aftermath of that partisan battle, we need to return Michiganders’ attention to an important nonpartisan issue:  prohibiting firearms at our state’s Capitol in any hands other than those of law enforcement officers.  News media coverage of this issue in recent weeks reminds us of the importance of this issue for reducing needless risks posed to legislators, staff members, tourists, and the school children who will presumably resume their class trips to the Capitol in 2021. 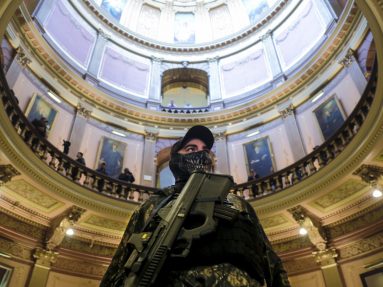 The Washington Post (November 1, 2020) published a careful study of photos and videos from three different protests at the Capitol at which men subsequently arrested for plotting to kidnap Governor Whitmer were carrying weapons of war.  The most notorious photo shows several of these men holding military-style rifles in the visitor gallery as they looked down at the legislators on the floor below.  Other photos showed accused plotters holding weapons outside the legislative chamber as well as on the Capitol’s front steps.

The evidence gathered by the FBI for the case against the plotters provides compelling reasons to ban civilian-carried firearms, not only inside the Capitol, but also on the Capitol grounds.  As reported by the Washington Post,

[One accused plotter] was recruiting others for the planned attack on the Capitol in Lansing while at a rally, according to information captured on a wire worn by a confidential informant and described in court filings.
Days earlier, in a recorded call, [the accused plotter] allegedly had shared details of the operation to storm the building and the plan to take hostages and arrest the governor for “treason.”

In other words, permitting civilian-carried firearms on the Capitol grounds has already invited planning for the use of the Capitol steps as a staging area for a potentially horrific attack on the seat of our state’s democratic governing system; an attack that Capitol officials would not be prepared to prevent if it had a critical mass of armed participants.

Is there a beneficial—or even benign—purpose for citizen-carried firearms in the Capitol or on Capitol grounds?  I have yet to hear such a purpose articulated by those opposed to a ban on citizen-carried guns.  The current opportunity for people to bring their firearms to the Capitol is the product of permissive policies and not protected as a constitutional right by the legal definition of the Second Amendment.  As the late Justice Antonin Scalia, conservative icon and gun enthusiast, wrote in the U.S. Supreme Court’s seminal opinion defining the Second Amendment right:  “[N]othing in our opinion should be taken to cast doubt on…laws forbidding the carrying of firearms in sensitive places such as schools and government buildings….” (District of Columbia v. Heller, 2008).  Reasonable time, place, and manner restrictions can legally be imposed on citizens’ ability to carry firearms, just as is the case with the exercise of free speech rights under the First Amendment.

The actual behavior of those who bring weapons of war to the Capitol invites the conclusion that their actions meet the FBI’s definition of “domestic terrorism.”  Camouflage-attired individuals with military-style weapons looking down at our elected representatives implicitly conveys the “threatened use of force and violence…to intimidate or coerce a government…in furtherance of political or social objectives” (FBI Congressional Testimony, 2002).

In 1954, five members of Congress, including Michigan Congressman Alvin Bentley, were wounded on the floor of the U.S. House of Representatives when four people fired pistols from the visitor gallery at the 373 representatives working in the legislative chamber that day.  This is history that we do not want to relearn through tragic experience, especially given the potential lethality of the military-style rifles we have seen carried in our Capitol’s visitor gallery.

News reports about the Michigan State Capitol Commission in recent months have informed the public of two facts:  1)  the Commission possesses the authority to ban citizen-carried firearms at the Capitol; and 2) some members of the Commission would prefer to leave the issue alone and let the state legislature act—or not act—on this matter of importance for both public safety and the integrity of our lawmaking processes.  The members of the Commission need to be keenly aware of this fact:  even if the legislature possesses the ultimate authority over this issue, the Commission is setting a default switch that defines the status quo.  Should that switch be set to the current rule that maximizes risk to school children, tourists, and legislators?  Or should that switch be set to a rule that seeks to reduce risk and enhance safety for everyone who visits our state’s Capitol?

There are compelling reasons to reset that switch to a rule that seeks to reduce risk and enhance safety.  Are there any substantive reasons whatsoever for leaving that default switch in favor of a rule that heightens the risk of horrific events?  This question looms quite ominously in light of the FBI’s evidence that people have actually planned to use the current rule as a springboard for inflicting death and destruction at our seat of government.

Dear Capitol Commission Members:  If you genuinely believe that the state legislature should make the ultimate determination about whether citizen-carried guns should be permitted in the Capitol and on Capitol grounds, that is fine.  But please, please use your recognized authority to reset the default switch to a rule that seeks to reduce risk and maximize safety.  If you do not act and the unthinkable happens, you cannot place sole responsibility on the legislature.  You have the authority and opportunity to change a rule that serves absolutely no beneficial purpose.  Indeed, the current rule only creates needless risk.  The people of Michigan need and want you to take action, even if you know that your action can be changed later by the legislature.  Like other public officials, you should want to be able to look in the mirror and say, “I did everything I could to protect and serve the people of my state.”