Tragedies produce numbers. This is true of hurricanes, tornadoes, floods, and other events that take lives and, at least momentarily, grab the news media’s attention. These numbers include dollar amounts for financial losses and subsequent expenditures for prevention and repair. More importantly, they include numbers for deaths and injuries. On September 11, 2001, nearly 3,000 people were killed from hijacked planes crashing into buildings in New York and Washington, D.C., plus the deaths in Pennsylvania when one plane went down in a field as the passengers fought the hijackers. In the two decades since that tragic day, the United States has spent hundreds of billions of dollars on security measures, counter terrorism activities, and the creation of new federal agencies (e.g., Department of Homeland Security, Transportation Security Administration, etc.). Even more has been spent on foreign combat operations triggered by the events of that day. These consequences and costs are understood to reflect the shock and fear generated by that day’s unexpected events. No Americans knew with certainty whether they might be at risk of victimization in a future attack.

What happens when tragic numbers feel overwhelming? We have seen the deaths of 550,000 Americans from coronavirus in a single year. Most political leaders treated the pandemic as a threat that deserved to be regarded with shock and fear. Everyone was told that they could be at risk of a fatal infection. Yet, other officials did not treat this threat as a matter that required significant, urgent action. And, for everyone, the number of reported deaths climbed month by month so rapidly and significantly as to perhaps move beyond genuine comprehension. Can tragic numbers be so massive that they become, in effect, impersonal—as if occurring elsewhere beyond some distant horizon? For some Americans, this may be how they perceive the pandemic.

The United States experiences approximately 40,000 gun fatalities each year.  These deaths, as well as non-fatal injuries from gunfire, produce other numbers, too.  It is estimated that gun deaths and injuries cost the American medical system $170 billion each year (Reinberg, 2020).  Shootings also impose economic hardships on individuals and families, when breadwinners are lost or incapacitated and when people face mounting bills for medical care, rehabilitation, and funerals (especially if they do not have health insurance and life insurance).  These are daunting numbers, yet they have become routine.  They do not generate the kind of shock that instantly triggers our dedicated commitment to preventive and remedial actions.  As in the coronavirus example, we must worry that the numbers are so routine and overwhelming that they become both too familiar and distant from our daily lives (at least for those whose families are not directly affected). 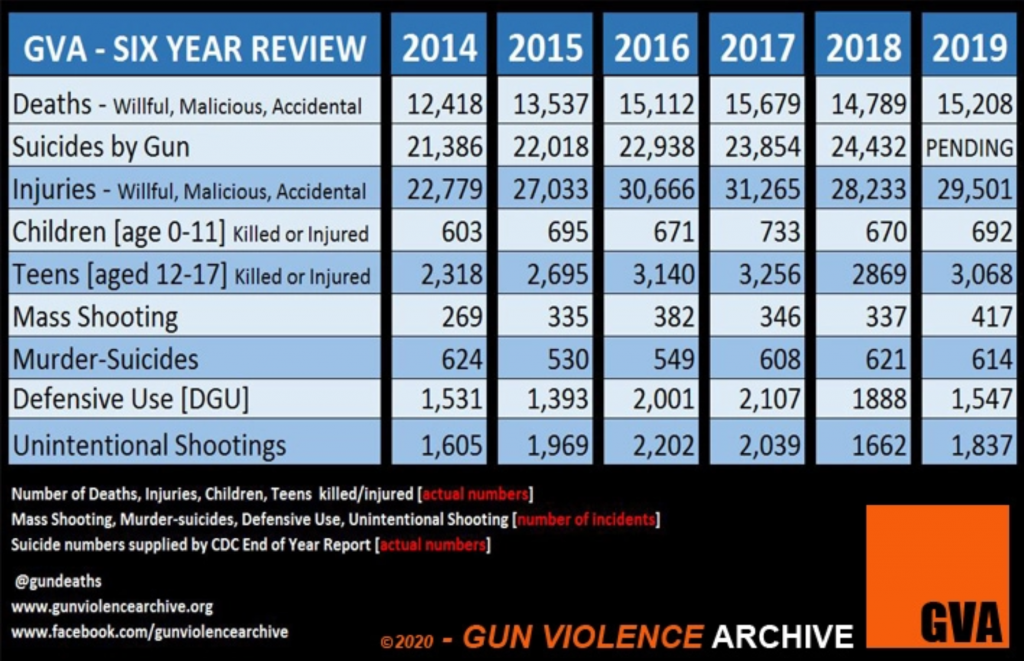 In the context of our apparent numbness to the numbers produced by certain tragedies, there may be moments when a specific number is so stunningly unanticipated that it sticks in the mind, as if tattooed on the brain.  One striking number that I find unforgettable came from the August 2019 mass shooting in the entertainment district in Dayton, Ohio (Hassan, 2019).  The searing and tragic number is this:  26 people were shot in the short span of 32 seconds (killing 9 and wounding 17).  Picturing this carnage occurring in less time than it takes to warm up a cup of coffee in a microwave brings a flurry of questions to mind.  What is the civilian purpose of a weapon capable of doing so much damage so quickly?  Should such weapons be available to the public?  If so, why? (Note: there is no 2nd Amendment right to own such weapons: See District of Columbia v. Heller, 2008). What kind of threat do these weapons pose to all contexts of American life, including—as we know from sad experience—children in schools, shoppers at Walmart and grocery stores, concert goers in a plaza next to Las Vegas hotels, and people at work in their places of employment?  And why doesn’t this example of instant carnage compel us to act to reduce the risks of such events in the future?  The final question is explained by political and ideological reasons, but the first three questions have yet to be answered adequately.

Another eye-catching number appeared recently in Nick Kristof’s New York Times column entitled, “How Do We Stop the Parade of Gun Deaths?” (April 3, 2021).  Kristof wrote:  “In a typical year, more children from infancy through 4 years are fatally shot in the United States (about 80) than police officers (about 50 or fewer).”  Think about that for a moment.  We know police officers have dangerous jobs.  They signed up for those jobs.  They receive training to prepare them for risks.  We pay them and honor them for their service.  Toddlers?  The most helpless and vulnerable among us—what do we say about them?

I double-checked Kristof’s statement using data for comparable years that was quickly accessible online.  The data for toddlers are from the National Safety Council and the police data are from the FBI: 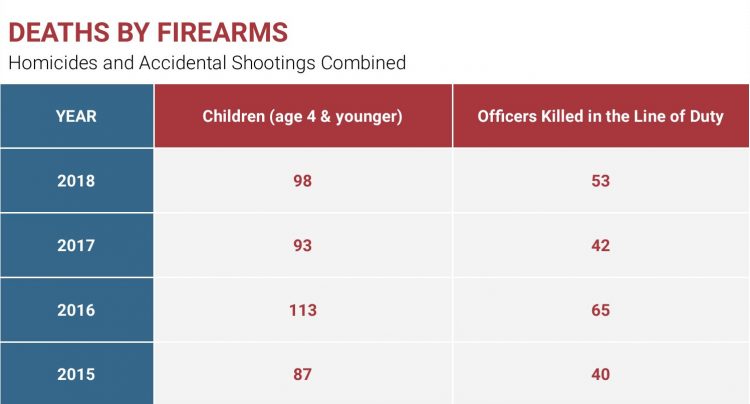 The data demonstrate, as Kristof says, “No one is spared.”  If we take for granted that gun violence risks are spread throughout all age groups, then one might claim that the numbers are not surprising in per capita terms as there are far more toddlers than there are police officers.  Yet, in actuality, the numbers are shockingly heart-wrenching because, unlike police officers, toddlers do not knowingly place themselves into situations of potential firearms danger.  Surely, as we look for common ground when faced with a great divide in Americans’ viewpoints on firearms, we ought to be able to agree that toddlers’ lives matter.  We ought to be able to discuss how to encourage safe storage of firearms and reduce access to firearms by those known to engage in family violence—two contexts that contribute to toddlers’ firearms fatalities.  Yes, we are accustomed to feeling numb when confronted with certain tragic numbers.  Yet, if we are willing to look more closely at specific facets of gun violence, we will discover numbers that should shock everyone into thinking about modest steps to reduce risk and harm to the most innocent and vulnerable among us.