We seem to be at a moment when it can be difficult to keep up with the news. So much is happening in the wider world that it might be easy to miss notable stories specifically related to continuing efforts to address the problem of gun violence.

“Sandy Hook Families Settle for $73 Million With Gun Maker Over Massacre: Victims’ families had sued Remington, the maker of the AR-15-style weapon used in the attack at an elementary school in Newton, Conn.”  New York Times, February 15, 2022 (nytimes.com)

Comment: Civil liability has historically provided a powerful tool for forcing companies to make consumer products safer. Unfortunately, a law enacted by Congress and defended with determination by the gun lobby provides special protections against lawsuits for gun manufacturers and sellers. The Connecticut case was unusual because the Sandy Hook parents identified a state law about harmful advertising of products to serve as the basis for their lawsuit. These laws do not exist in every state. The Connecticut result is very unusual and highlights the need to eliminate the federal law so that gun manufacturers and sellers face the same accountability measures and pressures to enhance public safety that are faced by other industries that make and sell consumer products. In effect, the news about this settlement highlights a policy pathway that is not readily available for reducing the risks and harms of gun violence. 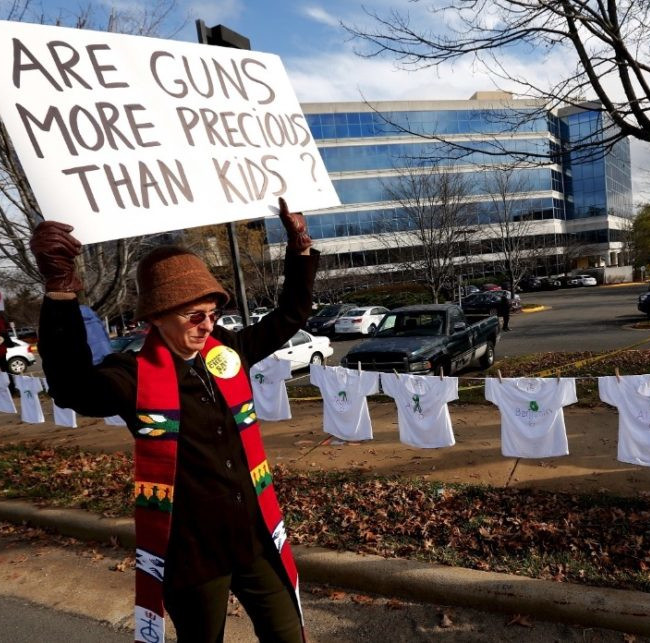 “Historic Funding Could Transform Gun Violence Prevention Efforts. But Can Smaller Groups Get Hold of It?” The Guardian, February 15, 2022 (theguardian.com).

Comment: As detailed in the article, “the Biden administration directed counties to use American Rescue Plan funds for violence prevention work.” The challenge ahead is to get the money to small “local groups whose staff [is] entrenched in the streets and [have] a proven track record of diverting people from violence and helping families and individuals heal.” This is a very positive development. Violence prevention programs at the community and neighborhood levels can provide beneficial approaches for the reduction of risk and harm. As the article describes, however, it can be difficult for small, local organizations to navigate complex grant processes and accounting requirements in order to gain access to these resources. It remains to be seen whether implementation of this approach will succeed and achieve its potential for positive results.

Comment: In 2019, Michigan Senate majority leader Mike Shirkey promised to hold committee hearings on proposed “extreme risk protection order” (ERPO) bills. A dozen other states already have such laws that authorize judges to temporarily remove firearms from the possession of individuals when there is evidence presented by family members or law enforcement that they pose a risk to themselves or others. This can be an important tool to reduce risk, especially in contexts of personal crises and conflicts that point to potential suicides or family violence. The hearings did not happen after the pandemic arrived but now there are promises to hold hearings to gather information and air perspectives within the next month or so. If any hearings occur, this will feel like a major breakthrough in the state legislature because gun violence prevention bills have been denied any hearings in either legislative chambers for a number of years. However, Sen. Shirkey has been quite explicit in saying that the fact he will schedule a hearing does not mean that he will permit any vote to occur on such proposals. This is a moment when people should let their legislators know their views about these issues.

Comment: Led by the youth organization, March for Our Lives, that was founded by survivors of the high school shooting in Parkland, Florida, several national groups are initiating action in a different policy pathway:  attempting to push President Biden to use his available authority to emphasize gun violence prevention. Obviously, Biden cannot control those in the U.S. Senate who block action on legislative proposals. However, the new initiative has identified four actions that they want to push the president to take:

3) appoint an assertive head of the Bureau of Alcohol, Tobacco, Firearms, and Explosives (ATF) who will actively regulate and hold accountable the firearms industry; and

4) use the president’s national “bully pulpit” to prioritize attention to and executive action on gun violence issues.

Given how stalled action on gun violence issues has become, it seems very worthwhile to advocate the employment of other tools for policy action. However, it remains to be seen whether gun violence can rise on the agenda for the president’s attention and action in light of daily concerns about Russian military action, inflation, the pandemic, and other pressing issues.

Comment:  A new coalition, called End Gun Violence Michigan (migunsafety.org), comprised of community action organizations, families victimized by gun violence, and church groups, announced plans to explore initiating a ballot issue proposal on gun violence if the state legislature fails to take action in the aftermath of the Oxford High School shooting.  Citizen-initiated laws must face an expensive, difficult process, so there is nothing easy or automatic about even being able to place a proposal in front of voters.  This new organization and its efforts are well worth attention and potential support from those concerned about the continuing inaction on gun violence by our state legislature.

Waiting for action by policy makers can be frustrating and disheartening.  These recent news stories about accelerating citizen action demonstrate continuing commitment throughout the country by people concerned with reducing gun violence. These examples remind us of the need to continuously communicate to elected officials how strongly we desire to see policy action on these issues.